Welcome to Friday Favorites, where we’ll be talking about the books and movies that have received the official WPL staff seal of approval!  To kick off the Halloween season, I’m starting off with one of my favorite horror novels of the last decade: A Head Full of Ghosts by Paul Tremblay. 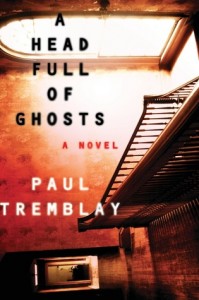 The Barrett family is torn apart when their oldest daughter, Marjorie, starts displaying signs of schizophrenia.  At least, that’s what it seems like at first.  But as Marjorie descends into madness and her doctors struggle to help her, her father starts to believe that something far more demonic is at play.  He arranges for a priest to perform an exorcism, and for a production crew to film the process in order to cover Marjorie’s increasing medical bills.  And when tragedy strikes the Barrett family on network TV, their story becomes the stuff of legend

Fifteen years later, Marjorie’s younger sister Merry agrees to be interviewed about what actually happened in her house.  But how much does she really remember?

I’ve read a lot of horror that straddles the line between the supernatural and the psychological, but this is by far one of my favorites.  I think the best way to describe this book is in terms of horror movies, so think about this story as a combination of The Exorcist,  the “found footage” format of Paranormal Activity, and the TV show Ghost Adventures. It takes a classic conflict between science and religion, infuses it with pop culture elements, and then finishes with a sucker punch of an ending that leaves you reeling.  If you want a story that horrifies you and makes you think long after you turn the last page, this is one of the best suggestions I can give.